Alright guys, I got that reenlistment bonus coming and I am going crazy to build my first pc (I've always just bought gaming laptops since their easy in the military). I'm super excited building my desk in the garage and plan on running two curved monitors, Costco has some good deals currently on some Ultra HDs. I'm looking for advice and/or build recommendation for around $1200 bucks, I've found a few websites that update monthly their builds at certain price points but want some more input since this is A LOT of money to me I'm dropping. Should I go AMD or Intel??? What processor's core, speeds, etc.

DocWhitneyEst89 said:
Alright guys, I got that reenlistment bonus coming and I am going crazy to build my first pc (I've always just bought gaming laptops since their easy in the military). I'm super excited building my desk in the garage and plan on running two curved monitors, Costco has some good deals currently on some Ultra HDs. I'm looking for advice and/or build recommendation for around $1200 bucks, I've found a few websites that update monthly their builds at certain price points but want some more input since this is A LOT of money to me I'm dropping. Should I go AMD or Intel??? What processor's core, speeds, etc.

Please help!
Click to expand...
As an Intel guy the answer is AMD lol. Does the budget include the monitors or is that a separate budget? That is going to make a huge difference in the answers here.

3800X unless you want to save $30 and get the 3700X or have more budget to step up another notch. Main question there is really going to be do you do anything other than gaming, do you stream etc.

Start small, figure out the GPU and then pump the rest of the build back up until you run out of budget.

Price is just tower. Monitors, mouse, keyboard, headset I already have or picked out. And only playing my games, no streaming them.

dual monitors with eat up half of your budget and leave nothing for your build. 1200 would just be for your build and run a regular monitor. I spent around 1000 on my own build but i had the video card already (GTX 1080Ti). but now that they have good AMD I wouldn't know which amd to get. and already thinking about upgrading my m.2 drive to a 1tb. for a monitor I use a 55" TCL 4k tv.. works great for my gaming. also, I bought the deepcool processor fan to do a push/pull configuration. 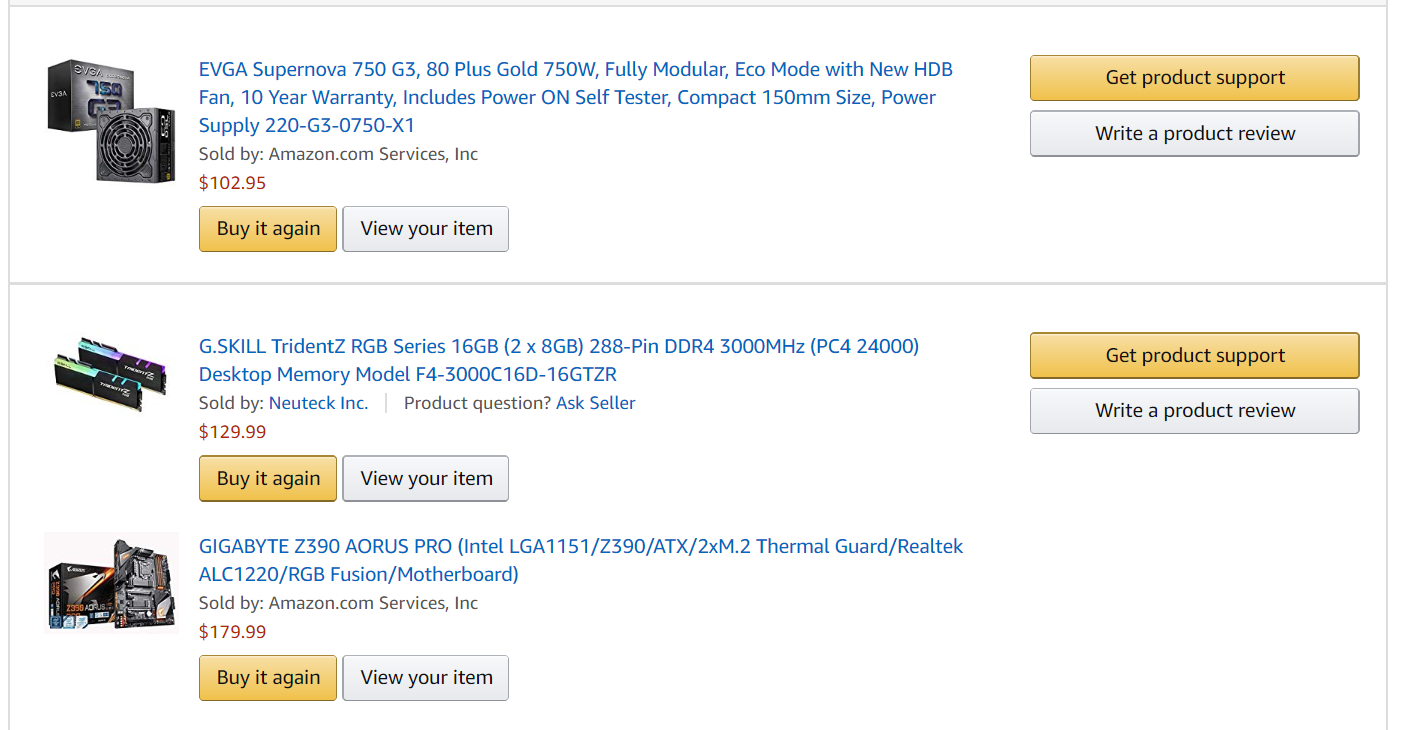 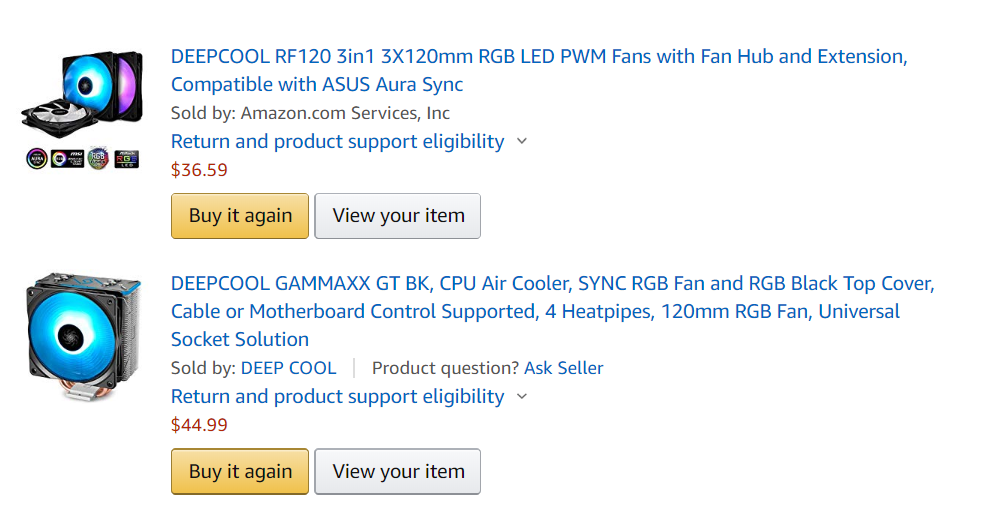 DocWhitneyEst89 said:
Price is just tower. Monitors, mouse, keyboard, headset I already have or picked out. And only playing my games, no streaming them.
Click to expand...
Well for just gaming one way to approach it you can buy a 3600X and then blow most of the budget on a graphics card and be great. If you are the kind of person to upgrade a CPU this could even hold you over until the Zen 3 stuff comes out next year. It's going to save some dough on only lose a couple fps. But if in reality you will never upgrade the CPU ever this is probably a bad move for the long haul.

I do alot of video editing, 3d rendering, etc. Outside of gaming having more than 6 cores 12 threads is always an advantage for me. But saving $100 on the CPU and putting it into a GPU to drive those nice monitors you want is still something to think about.

whats the specs on the monitors you want to run??? (i see you have them picked out)....this will factor in to a lot of things in setting up the system

3...motherboards....read reviews and check many sites to see what their really saying in places like Tom's hardware or even youtube videos from people like "linus touched tips" (hehe....its a joke its really linus tech tips).....spending a little extra on the motherboard to get a 570 based motherboard over a 470 board will make it last longer as it will have CPU support going farther in to the future then a 470 board(simply put a better motherboard now means you can upgrade CPU's down the road without changing boards or even reinstalling windows)....also remember that the form factor ITX, mini ATX and full sized ATX will factor in to your case you must buy.....ITX can cost a lot of money and be cramped to work with do to its small size....full sized ATX motherboards might give you a case to big for your liking....mini ATX might not give you all the options you want so look around and look hard....no easy answer on this....new motherboards come out almost everyday

4...power supply.....Seasonic, EVGA and corsair are the only 1's i would ever look at.....and i am bias towards EVGA's super nova line simply because they come with a 10 year warranty from a company that has been around for decades.....do not cheap out on the power supply....its the 1 thing that can fry your system if you get a cheap 1.....its worth the extra money here as you will keep this part for many years (my current 750watt EVGA super nova is 7 years old and has been in 4 total PC's builds)....if its not broke dont fix it!!! and get at least 750watt as the extra power maybe needed down the road

7...the graphics card....well this is were the monitor meets the road....this will be factored mostly by the monitor you want to run with the resolution being the first factor followed by the refresh rate.....if you go with 16gb of memory, a stock 3600 CPU, the SSD drives i listed and a EVGA PSU you should have about 500 to 600 bucks left to buy a GPU.....


this is just my opinion on what you could do....it will come down to what you want out of the system....

Mostly due to good price I’m looking at 27 or 32” Samsung curved monitors that are 1080 and 60hz refresh. But I’m looking at other sites trying to find 144hz on sale too

DocWhitneyEst89 said:
Mostly due to good price I’m looking at 27 or 32” Samsung curved monitors that are 1080 and 60hz refresh. But I’m looking at other sites trying to find 144hz on sale too
Click to expand...
I was
GPU wise I was looking at the RTX 2070s

If you decide to add some EVGA products to your shopping list, they have a D.I.Y. page that adds discounts when you buy products together like a graphics card, case, and power supply. It's a nice way to save some money at the www.evga.com web store. The bundle page can be found here: https://www.evga.com/products/diy/

Plus, I have a discount code that will save you even more on top of the bundle discount, it's good for everything at www.evga.com including items already on sale. Just apply this code to your shopping cart before you check out: XX95PJN1T76IONP

They don't sell AMD motherboards, but they have a lot of items with a great warranty and terrific customer service, plus free shipping. Good luck with your build!

Here is what I would build if you have a ~$1,200. https://pcpartpicker.com/list/YWdkJb

If you have a MicroCenter nearby you can save an additional $20 on the i5 and $20 on the MB. I have one in my neighborhood if you really want, happy to ship to you.

If you are only gaming Intel is the best pure gaming performance. An i5 with a good air cooler (Hyper 212 Evo) and solid MB (Aorus Pro) should OC to 5.0 GHz.

If you have a little extra money to spend I would first upgrade to the CPU to an i7 9700K, then add a 1TB NVMe SSD and finally increase RAM to 32GB.

I appreciate all the help guys, I’ve got 2 list running on Amazon to keep track I’ll post the one I’m leaning towards here shortly. See if any of you guys see something I’m drastically fucking up

Disregard the attachments, after playing around on the pc part picker I’ve built
My order and made sure all compatible be placing it shortly I think
Last edited: Dec 9, 2019

i just finished my build, reused my xfire vega56s, it was based on 3800x, on MSI x570 gaming edge mobo, with 970 evo 1tb m.2, 2tb samsung 860 evo, corsair 1200atx PS, couple 8 gig tridents that light up(changed the timings to get the full 3600 speed they are rated for , and some cheap tower i dont remember the name of, its beasting, i dont think this PC is breaking a sweat playing games..i load pretty much first all the time in most games.

none of the links work....would love to see what your lists look like

Holy smokes, just got an email from EVGA. If you haven't bought your video cards yet, here's a sweet bit of news about a special sale on 2 really nice cards with big discounts.

Here are the two deals plus the extra savings with my associate code.